Coco Chanel said, "A girl should be two things: who and what she wants," and the many women involved in Freeland Spirits have done just that. Jill Kuehler, Molly Troupe, Lee Hedgmon, and many more women have embraced their passions and talents and helped create and contribute to the inspiring Freeland Spirits Distillery and Liquor Brand.

Freeland Spirits isn’t just proudly woman owned, it’s also woman inspired and women operated. Jill Kuehler founded the spirit brand, wanting to open a distillery from the moment she entered one, and they became one of very few distilleries run by women in addition to women owned and founded. The distilling process is managed by master distiller Molly Troupe, the youngest female distiller in America, and the grains used in the spirits are grown locally by female run farm, Carmen Ranch. In fact, Cory Carmen of Carmen Ranch is part of how  Freeland Spirits came to be. Jill was having a glass of whiskey with her friend Cory, female beef rancher, when Cory made the offer, telling Jill "that she’ll grow the grains, if Jill makes the booze." And that's pretty much the way it happened, with Molly on board and a lot of hard work in between. Freeland Spirits is not casually women owned and operated, rather prioritizing women very consciously. Following in the path of their namesake, Jill's grandma Freeland, who taught her that "all good things come from scratch and women can be anything they want to be," Freeland Spirits strives to advance the opportunities for women and marginalized groups in the alcohol industry. In Jill's words: "We’re really trying to give a place for women and people of color that may have felt left out of the industry;" her rationale for the creation of  an internship program at Freeland Spirits designed for women and POC to learn more about production in the premium spirits industry. Freeland Spirits distillation team-member Lee Hedgmon says that she thinks about the fact that she works only with women "all the time," and that "We look at the world and we mark it through the lens that we are familiar with. And we’re familiar with being women in a world that doesn’t think we drink or should.” Viewing alcoholic beverages as “a tool for celebration," Freeland Spirits strives for that concept to be a core part of everything they do, while destroying glass ceilings and racial barriers in the process. Freeland Spirits has science and talent behind the door of their distillery, with master distiller Molly Troupe bringing the expertise gained in the Scotland Heriot Watt University Masters in Distillation program, along with her previous education in biochemistry. Distillation team member Lee Hedgmon brings multiple talents to the table as well, having been working on her PhD in Feminist Studies when she decided she would just "rather be a brewer," along with being a beekeeper and honey blend creator. The Freeland Spirits distillation process is unique in that they use two different distillation techniques, both heated and cold, which is uncommon in the industry.

The Freeland Spirits Themselves The Freeland Spirits Bourbon, in which “soft caramel, vanilla and spice dance into the whiskey from charred American oak barrels,” has aromas of toffee, marmalade, smoked pecan and clove, and has a smooth taste of "soft caramel and baked berries layered with vanilla bean, cocoa and spice." Freeland Spirits' savory, spicy, and botanical Geneva has "a rich grain backbone heightened by peaks of alluring spice and hints of Willamette Valley hazelnuts." The Geneva has aromas of fresh baked bread with botanical hints, and tastes of rye and buckwheat with nuances of hazelnut and juniper. 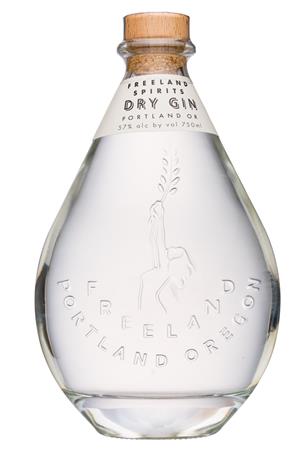 The brave Navy Strength London-Dry style Gin was created in honor of the groundbreaking women who are paving the way in terms of equality for women in the workforce, with juniper at the forefront and nuances of forest greens, citrus, green olives, and spice. Freeland Spirits took some rye barrels and transferred them into Magdalena Rum barrels. The rum barrels infused flavors of caramelized pineapple, with the rye adding the spice. After two years in those barrels, the combination was transformed into the Freeland Spirits Straight Rye Whiskey, with only 600 bottles released total. According to Tipxy.com, tasting notes include hints of "thick caramel syrup drizzled over ice cream, hints of marzipan and caramelized pineapple." Check out Absinthia's Absinthe, Kavita Channe and Channe Rose, and Bestie Bubbly for more inspiring stories about women entrepreneurs in the alcohol industry.