Mythology Distillery was created by a love and awestruck wonder of travel and nature combined with quality spirits, and the storytelling and bonding that results from those two together. As the saying goes, "Drink well and travel often, and don't forget your Mythology Spirits in that well worn suitcase of yours." Or something like that. Alaskan backcountry where the idea for Mythology Distillery began. Photo credits: Will Wissman

“Travel leaves you speechless, then turns you into a storyteller”

Medieval explorer Ibn Battuta is accredited for the quote above; his reflections on his travelling experiences mirror the inspiration that became the Mythology Distillery.

Three friends from Colorado went on a skiing adventure in Alaska, spending the days of their trip tackling impossibly steep slopes and the nights at a craft distillery in the area, sharing whiskey and cocktails and bonding over the thrill of their adventure. The "duality of enjoying whiskey with friends while sharing experiences" galvanized Mythology Spirit Company founder Scott Yeates to begin his own distillery in Denver, Colorado, founded on ideals of mystery, wanderlust, adventure, and connection. Mythology Distillery is a continuation of Scott's own travel story, and uses the Mythology Spirits to encourage and enhance travel, adventure, and storytelling. 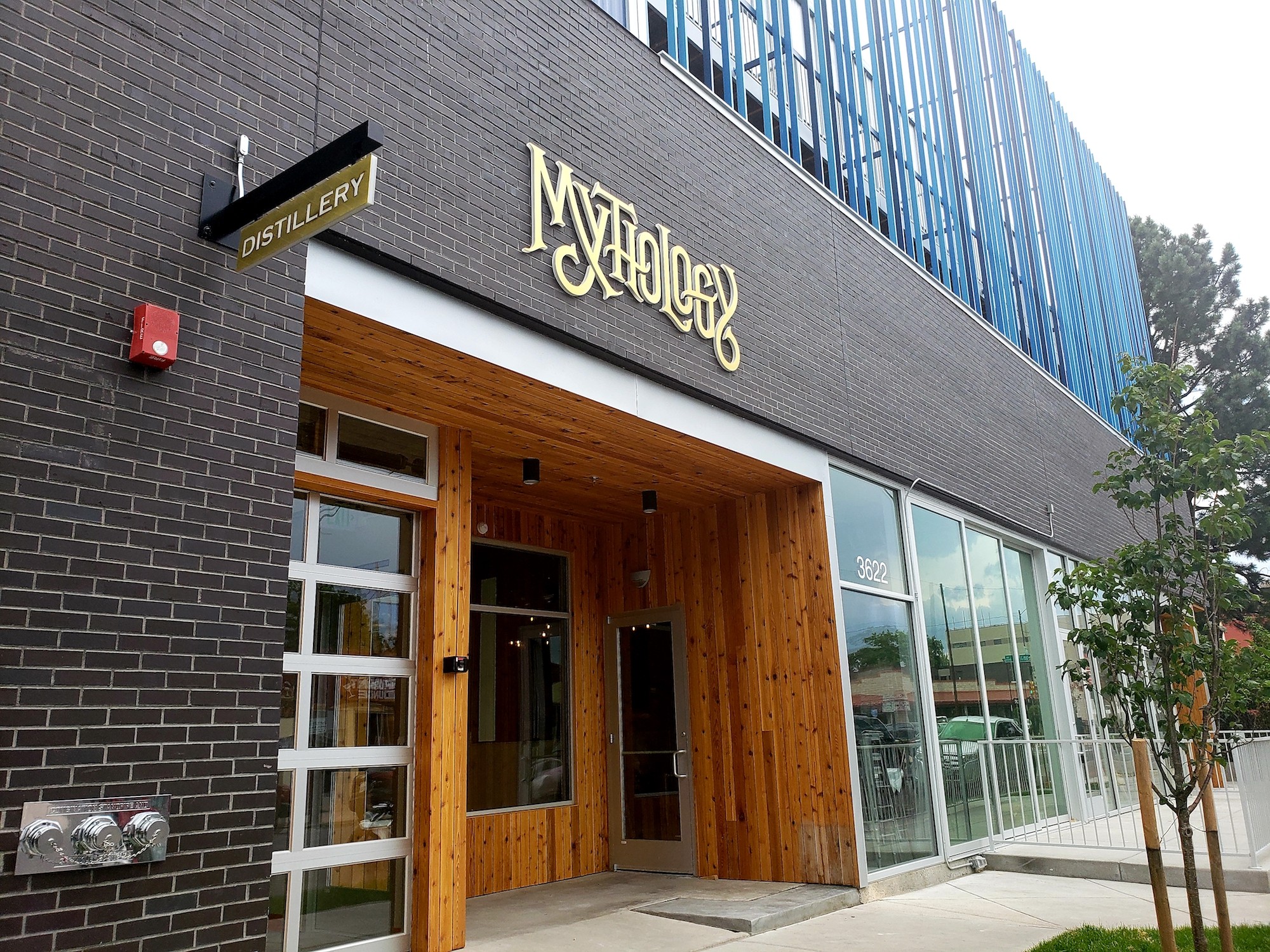 A proud Denver distillery, Mythology takes its carbon footprint seriously, making environmental sustainability a priority. While the Mythology website states clearly, "We care about our planet," the distillery follows through on that value by using locally sourced ingredients for their spirits and incorporating a sustainable manufacturing process.

This environmentally friendly process involves closed loop boiler and chiller systems, allowing for condensate and chilled water to be reused over and over again, conserving about 500 gallons of water with each batch of spirits produced. That's a pretty impressive number, and it's with the intent to preserve and cherish what these Coloradans call "their backyard playground" (aka, the earth).

Mythology also takes spent grain and recycles it as cattle feed, recycles glass and paper for packaging, and either recycles or composts almost all of their produced waste, both at the manufacturer and retailer levels.

Mythology Distillery's belief and motto "is that we each form our own Mythology through travel, connecting with others and our experiences," and there is a strong element of magic and community infused into the Mythology Spirits and the company values. The Mythology Spirits are a way to encourage the telling and retelling of stories, fostering connection and community no matter where you are in your travels. The Denver based distillery is a proud craft brand that "invokes conversation and brings community together" whether that conversation takes place on a bright and joyous island adventure, the cozy nights of a skiing trip in Alaska, or a small cabin in a faraway woods.

Each spirit produced by Mythology Distillery was inspired by another spirit animal, reflected in the name and bottle design. The mythology spirits have won over 50 awards, and were named Colorado’s Top Distillery consecutively.

The nose consists of wildflower honey and warm cornbread, and once the bourbon hits the palate, you'll know why it's called Best Friend. Honeycomb hits the palate, gently transitioning to subtle flavors of toasted almonds and cinnamon. The finish, stemming from the 15 year Kentucky Bourbon is one of "lasting rich vanilla, pipe tobacco, and black currant."

Best Friend Bourbon honors the dog, man's best friend, as a spirit animal, loyal to a fault and always present for some company. The bottle shows the man and his spirit animal, helping him to create his own mythology through good bourbon and friendship.

Best Friend Bourbon can be found online at Tipxy.com for $59.99, with free shipping on orders over $100.

The Mythology Hell Bear American Whiskey is a blend of straight rye whiskey and a 4 and 5 year bourbon, and is made up of rye, malted barley, corn, and wheat. The 45% ABV Hell Bear Whiskey adds a kick to any cocktail but is still smooth enough to drink neat.

Hell Bear is bursting with upfront flavors of fruit and botanicals and cinnamon spice, with rye spice flavors mid-palate and a finish that is smooth and tastes of vanilla, caramel, and the spice of baking, as well as sweet cereal grains.

This whiskey comes along with a story about a Colorado prospector who falls in the mines and comes face to face with an animal that appears to be a cross between a bear and a badger. Following the glow of the mythological creature's eyes, the man makes it out of the mine and the creature, the Hell Bear, vanishes. This Hell Bear inspired American Whiskey is "sharp enough to bite through your favorite cocktail but smooth enough to be enjoyed neat."

Hell Bear American Whiskey can be found online at Tipxy.com for $59.99, with free shipping on orders over $100.

The Mythology Needle Pig Dry Modern Gin utilizes juniper, coriander seed, orris root, grapefruit, star anise, and sage botanicals. At 45% ABV, Needle Pig Gin can enhance a cocktail or stand on its own, truly in the spirit of its namesake.

Needle Pig Gin has aromas of sage spice and sweet pine, along with juniper citrus and grapefruit. The palate has notes of sweet jam at the forefront, with undertones of grapfruit, licorice, and pine following. Mid-palate flavors include anise spice and slight floral notes, and the finish is long lasting with flavors of citrus and sage.

The story of Needle Pig Gin was born when a trapper found himself facing a needle pig in a juniper field. He reached slowly for a weapon, but "when a mighty roar exploded from the forest," the needle pig puffed out his quills and the man grabbed his spear and they turned together to face the raging grizzly bear. The bear turned and ran at the sight of the needle pig, and Needle Pig gin was created out of respect for a spirit animal that can defend itself.

Jungle Cat Vodka has subtle notes of vanilla bean on the the nose, with soft spice mid-palate and a finish that is crisp and clean.

This vodka was created with mountain snowmelt, and fittingly in the spirit of the jungle cat. This fierce woman shown on the bottle has the tiger as her spirit animal, exploring the jungle among the mountains with a trusty bottle of vodka at her side. Jungle cat vodka honors fierce travelers with strong spirits and a lust for adventure.

Jungle Cat Vodka can be found online at Tipxy.com for $28.99, with free shipping on orders over $100.

Next time you're planning a trip you're hoping will turn into an adventure, grab a bottle of Mythology craft bourbon, whiskey, gin, or vodka from Tipxy and watch as you form your own travel mythology, with the help of the spirits, (the alcohol), and the power of exploration and storytelling.
Filed in: adultbeverage, adventure, alcohol, American whiskey, BestFriendBourbon, botanicals, bourbon, buy online, craft gin, Denver, distillery, gin, HellBearWhiskey, Mythology, NeedlePigGin, spirit animals, Spirits, Tipxy.com, travel
Share:
Share on Facebook Tweet on Twitter Share on LinkedIn Pin on Pinterest
Previous article Understanding Misunderstood
Next article Irish Coast Inspired: Kinsale Spirits