The Spirits of Life and The Scientist Behind Them

A spirit brand created as a microbiologist's second career, Vitae Spirits Distillery stems from local ingredients and community collaboration; infusing the essences of Virginia life into each of the Vitae Spirits.

All About Vitae Spirits Distillery He originally got interested in microbiology because he wanted to figure out what was going on with his beer, and one thing led to the next. One thing led to the next, of course, means that a Harvard degree in Organic Chemistry and Biology led to a UC Berkeley Ph.D. in Molecular and Cell Biology and Bacterial Pathogenesis and Host Responses, until eventually Glomski was an established professor of microbiology and disease specialist.

A Distiller of All Trades

Ian Glomski is a man of many talents, having a long list of unique abilities. Glomski is an "experienced brewer, winemaker, cheesemaker, meat curer, kefir culturer, veggie pickler, wild mushroom forager, and infectious disease specialist," a cyclist, gardener, and motorcycle rider- a combination of skills not many can claim. Following a mid-life crisis, he can now add successful distillery founder to his list of accomplishments, as Vitae Spirits has 20 separate bottles on the market, 12 of which are available online in almost every state in America. Following A Mid-Life Crisis, He Turned To Alcohol

In 2012, the same year Ian Glomski turned 40, he dealt with a medical condition, complicated jury duty, and got trapped in a massive forest fire. These events combined were enough to poke and prod his natural career inertia until he started seriously thinking about switching his path, saying "if I stayed on course, I'd regret spending my limited years doing something that didn’t fill me with satisfaction at the end of the day."

Having both a family and personal history involving alcoholic beverages, attempting some kind of adult beverage company made a lot of sense for Glomski. Despite earlier success in the brewing industry, Glomski just wasn't feeling a craft brewery, and the dependence on the weather, seasons, and lots of land that vintners deal with made wine-making sort of unappealing. And so, craft distilling won out. Glomski felt the craft distilling industry was "young, just hitting its rhythm in the market, and drinking trends suggested that the cocktail culture was growing beyond a fad, into a real alternative to the beer and wine that had dominated in the past few decades." And he was right. Craft distilleries are growing in both number and popularity, and sites such as Tipxy.com that allow small craft distilleries to sell nationwide have increased interest, even for those with no craft distilleries in their area. 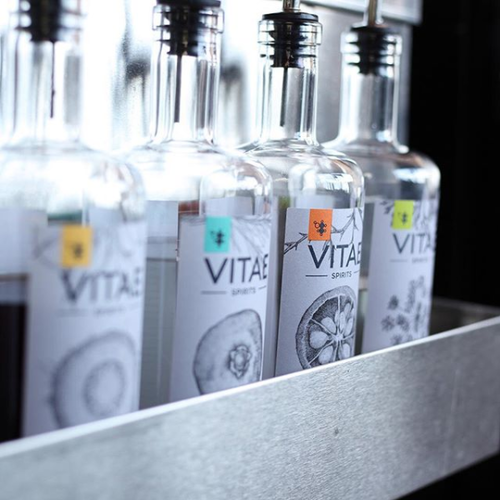 What Does Vitae Mean, and Why Is It The Name of a Distillery?

Vitae is latin, and it means life. Vitae Spirits are made in the spirit of life and community, with all the spirit bottles featuring a local botanical artist, Lara Call Gastinger. The Vitae Distillery incorporates cooperation with local businesses, industries, and ingredients. The natural environment is where life stems from, and Vitae Spirits believes that environment includes the community and social environment as well.

The Vitae Spirits name, according to founder Ian Glomski, fits the distillery well because “In essence, distilled spirits are the purification of life force. Sunlight converted to sugars in photosynthesis.” Vitae Spirits, in line with their emphasis on community and the natural environment, locally source most of their raw ingredients, "turning them into faithful expressions of their botanical origins" with the distillation and fermentation processes. The Vitae Spirits Distillery utilizes a unique 250 gallon copper pot still that was custom made for the Vitae Spirits Distillery, as well as custom made fermentation tanks that boast a temperature control feature.

Vitae Spirits Distillery focuses on preserving the local flavors and unique botanicals they use, and therefore are careful only to store their spirits in containers of plastic, stainless steel, glass, or wood, as opposed to activated carbons or fine filters that "can strip delicate flavors." This ensures the authentic flavors found in the Vitae Spirits.

What Are The Vitae Spirits? The Vitae Spirits Distillery has a wide selection of liquor available, with 20 bottles on the market and an emphasis on rum, gin, and liqueur. Some favorites include the low sugar, herbal and black licorice flavored Anisette, made from anise seed with a hint of citrus, the more classic San Francisco World Spirits Competition Silver Medalist Vitae Spirits Modern Gin, which is a crisp and clean dry gin made with 18 botanicals using the special Vitae Spirits process, and the San Francisco World Spirits Competition Bronze Medalist Vitae Spirits Golden Rum, a beautifully rich golden rum made from Blue Ridge Mountain water, locally grilled fresh sugar cane, molasses, and yeast. To learn more about each of the individual Vitae Spirits and how to try them, click here.

Where To Buy Vitae Spirits in the US

Tipxy.com! Tipxy.com has free shipping on orders over $99,  ships to almost every state in the nation, and offers 12 different Vitae Spirits bottles for good prices, bringing this small batch artisanal distillery from Virginia to your doorstep. If you live in Virginia, make sure to try out Vitae Spirits Tasting Rooms or book a Distillery Tour at the Vitae Spirits Distillery to learn more about this fascinating craft spirit company.