Who Was Mary White, And Why is There Vodka Named After Her? 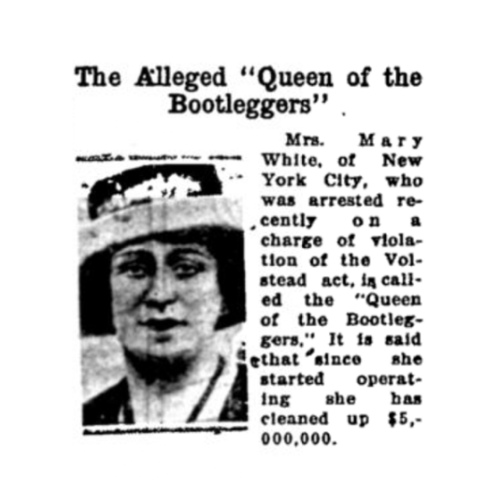 Contrary to popular belief, there were more women than men in the Prohibition Era bootlegging business, and one of these women was a New Yorker named Mary White. Deluxe Distillery created Mary White Vodka to celebrate "the legacy of Mary White, the uncrowned queen of bootleggers."

Naturally, with the estimated 5 to 1 women to men ration, there were many famous female bootleggers. Various interesting factors contributed to so many women being involved in illegal alcohol activities during the Prohibition, many of which seem ludicrous in modern times. Most states during the Prohibition Era had laws that forbid the searching of women by male police officers, and men were considered rude and highly offensive if they "accuse[d] a woman of such a dastardly crime."

In 1924, one officer in Ohio told the Hamilton Evening Journal that when attempting to find illegal alcohol hidden on one specific woman's "person,"  she laughed at him and "defiantly declared to bring suit against anyone who touched her." Women like this one took advantage of the patriarchal attitude of society at the time in order to continue their bootlegging and moonshining. Sometimes, it went as far as a woman who has been caught having "a hard time convincing the sheriff that the discovered still was really hers."

Not only that, but the consequences for these illegal activities were pretty minor. Some women who made tens of thousands of dollars bootlegging were fined a mere few hundred. "It seems as though the court system and politicians just didn’t have the stomach for putting mothers and grandmothers behind bars." One woman in Denver was forced to serve time following a bootlegging trial, however it was church time every Sunday for two years. Another female bootlegging was pardoned by President Harding, and in Ohio, the governor commuted one woman's jail sentence to only 5 days.

Sometimes men would recruit women to come along with them for a car ride, because the car was less likely to be searched if there were women in it. As Lugo says in Hooch and Hell Raisin' Women Bootleggers, "The word on the street was that no decent federal agent would hold up a car that had women in it."

Clearly, illegal alcohol production and distribution was a high profit, relatively low stakes business for many women in the early to mid 1900s, and one of these woman was Mary White, the inspiration for the suave white bottled Mary White Vodka. So Was Mary White Really The  Queen of Bootleggers?

If bootlegging was so common among women, what makes Mary White hold the title of queen?

It's not clear exactly what being the "Bootlegging Queen" involves, and while Mary White certainly made quite a bit of money off of her bootlegging activities, it seems she has competition for the official title. Cleo Lythgoe was known as one of the greatest female bootleggers, and perhaps even the Bootlegging Queen of the era.

Mary White herself, when caught in 1921 with $5,000 cash bootlegging profit on her, was asked by the press if she was the alleged Bootlegging Queen. Legend has it that she replied, “I wish the hell I was.”

Queen or not, Mary White is thought to have made over 5,000,000 off her illegal alcohol activities, and clearly met much success in the bootlegging field.

Mary White Vodka is a Belgian Spirit created by the Deluxe Distillery Luxury Spirit duo, Sophie Gheysens and Thomas Baert, shown in the Instagram photo above. Deluxe Distillery is also the creator of the popular Belgian Blind Tiger Gin (click here to find out more), and has met with much success both in Belgium and abroad.

The Mary White Vodka Bottle stands out as high class: sleek, elegant, and beautiful, with a basic white bottled design, subtle marble detail, and gold bottle cap and accents. The overall look is a vodka bottle both feminine and strong as marble. "Culturally connected with tradition and refinement, the luxurious and foliated marble design on the bottle of Mary White Premium Vodka is testimony to its pristine quality and typical character."

Inside the solid white bottle, the vodka is completely clear and a bit shiny. The nose is of grain, as the distillate stems from malted barely, and once the vodka hits the palate, "a fully developed tingly flavour" surfaces, including bread dough and a slight lemon spice. Undertones are earthy, tasting of malted barley, yet refreshing and smooth, maintaining a "silky texture on the tongue" and a tingly citrus filled finish.